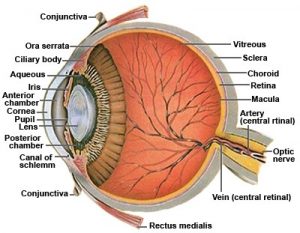 Cornea – The anterior clear part of the eye. It is the first clear “window” through which the light enters the eye. The transparency of the cornea is important in order for vision to be clear. Though it has many functions, one of the most important is to bend (refract) light entering the eye toward the lens, which in turn additionally focuses the light to the retina. The cornea also has a protective function.
The cornea is composed of five layers and is a very unique tissue because it has no blood vessels within the tissue and because it must remain totally clear for proper functioning and best vision.

Anterior Chamber – A term used to describe the area outlined in the front by the corneal endothelium (back surface of the cornea) and in the back by the crystalline lens. Aqueous fluid circulates throughout the anterior chamber.

Iris – A thin circular disc that gives our eyes their “color.” There is a circular aperture (hole) in the center of the iris called the pupil. The pupil varies greatly in size under different levels of light. Its purpose is to regulate the amount of light that reaches the retina by closing up in bright light and getting larger in dim light. It also gets smaller when the eye is focused for near tasks. This occurs to sharpen the focus by diminishing spherical aberration. Eye color is controlled by the amount of pigment deposited in the layers of the iris. Blue eyes have less pigment deposited and brown eyes have more pigment in the iris. It is true that most caucasian babies are born with blue eyes. As time goes on, an infant’s eye color can change.

Pupil – The center opening or circular aperture of the iris that appears black when viewing one’s eyes. The pupil enlarges when a person is in dim light and constricts (gets smaller) in bright light. Pupil reflexes are checked by doctors to assess certain neurological conditions. Eye doctors often dilate the pupil using medical eye drops so they can get a better and larger view of the retina, especially the peripheral retina.

Lens – This structure located between the pupil and vitreous. It acts as the second “clear” window of the eye. The lens differs from the cornea in that it has the ability to change shape in order to focus images at varying distances (accommodate) becoming shorter and fatter for near vision (more convex) and thin and long for far vision. A cloudiness or yellowing of the lens is called a cataract.

Sclera – The “white” part of the eye is actually a fibrous tunic which makes up about 5/6 of the eye’s outer coat. It functions to protect the structures within the eye and maintain the shape of the eye. Due to its fragile nature in younger children, it may have a “bluish” color. The sclera has many blood vessels and nerves running through it, but the most important vessel is the optic nerve

Conjunctiva – The thin transparent tissue overlying the sclera which continues over the posterior part of the upper and lower lids. Containing the most immunocytes of all the anterior eye structures, it serves as a protective layer against allergens and infective agents. The conjunctiva can be broken down into its three structurally separate parts: the palpebral conjunctiva lines the internal eyelids, the bulbar conjunctiva lines the sclera, and the fornix connects the latter two forming a cul-de-sac portion. An inflammation or infection of the conjunctiva is called conjunctivitis.

Aqueous – Fluid that bathes structures in the front 1/3 of the eye. This fluid comes from the blood vessels in the ciliary body processes and through a recycling circulation process flows from the posterior chamber into the anterior chamber. Eventually it returns to the blood system draining out through structures including the Canal of Schlemm. Some glaucoma medicine is designed to reduce the formation of new aqueous fluid to help decrease the pressure inside the eye. Most glaucoma eye drops  increase the ability of the eye to filter more aqueous fluid out to the blood stream through Sclemm’s Canal.

Ciliary Body – Muscle which functions to control accommodation of the lens. It is connected to the lens by zonular fibers. When focusing fine detail up close, the ciliary body contracts, the zonular fibers relax causing the lens to become more convex and move slightly forward. This creates a built-in zoom lens allowing the eyes to change focal power from far to near. As we get older, the crystalline lens of the eye hardens and has difficulty changing its shape. By about the age of 45, most people have lost some ability to change focal power from far vision to near vision because of this hardening of the lens. At this point, a bifocal is needed to see up close. This condition is called presbyopia and worsens even further until all ability to focus at near is lost unless a person is myopic and can remove their optical prescription and see at near. The epithelium of the ciliary body secretes aqueous fluid into the anterior chamber of the eye.
If the ciliary body creates too much aqueous or if not enough aqueous filters out of the eye, then the pressue within the eye can increase, which can cause damage to the optic nerve and the nerve fiber layer of the retina. This condition is called primary open angle glaucoma.

Canal of Schlemm – A vascular structure which spans the circumference of the anterior chamber and functions to return aqueous humor back to the general blood circulation of the body.

Posterior Chamber – A term used to describe the area surrounded in front by the crystalline lens and in back by the vitreous gel.

Choroid – A thin membrane that consists largely of blood vessels that nourish the outer part of the retina. It is the most posterior part of the vascular coat (sheet) of the eye and is located between the sclera and the retina. It is difficult to estimate the thickness of the choroid because of the numerous vessels. It is thickest in the macular area, posteriorly (about 0.22 mm) and thinnest anteriorly (about 0.1 mm) near the ora serrata where it ends along with the retina.

Vitreous – The gel-like material in the back of the eye. As we get older,  the vitreous becomes more liquidy and shrinks. This can lead to the formation of floaters which look like a small fly in your vision. The vitreous consists of water, collagen, hyaluronic acid and various proteins. During early eye development, the vitreous forms attachments with surrounding ocular structures: optic nerve, the fovea, the posterior lens surface, and the ora serrata. The strongest attachment is at the ora serrata.

Ora Serrata – The outer edge of retinal attachment to the ciliary body. This area marks the outer limits of seeable retina. The ora is less developed and thinner than the central portion of the retina. It is also the location of the strongest attachment of vitreous base to retina and therefore is a common site for retinal detachments.

Sclera – The “white” part of the eye is actually a fibrous tunic which comprises the 5/6 of the eye’s outer coat. It functions to protect the intra-ocular structures and sustain the shape of the eye. Due to its fragile nature in younger children, it may have a “bluish” color. The sclera is penetrated by blood vessels and nerves, but the most important penetration is the optic nerve (see below).

Retina – A thin multi-layered sensory tissue that lines the back of the eye. The retina contains two types of photoreceptors called rods and cones. Visual information received by the photoreceptors is translated to neural signals by the nerves called ganglion cells. The rods are more abundant in the peripheral retina and work to detect light/dark changes as well as shape and movement. Cones detect color and distinguish fine detail which is why they are denser in the central retina, especially in the fovea. 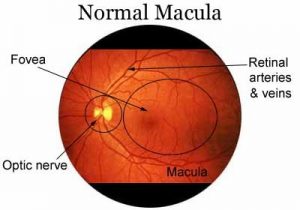 The retina is absolutely important to the function of the eye and is the site for many eye diseases and disorders such as macular degeneration, diabetic retinopathy, and retinal detachments.

Macula – This is the central part of the retina where cones are tightly packed. The fovea is the center part of the macula and is the part of our eyes that we use when looking directly at an object.

Fovea – This area is located in the center of the macula. The fovea is responsible for sharp central vision which is necessary for reading, watching television, driving, and any activity where visual detail is of primary importance.

Central Retinal Artery – The artery which supplies blood to most of the cells of the neural retina.

Central Retinal Vein – The main blood vessel that carries blood away from the eye. Veins appear darker and wider than arteries when viewed by special ophthalmic instruments (e.g. ophthalmoscopes) looking into the eyes.